More than 240,000 lives were lost in one of the most deadly tsunami events on record. Learn how warning systems better predict their path and impact.

December 26, 2004. What began as an undersea earthquake in the Indian Ocean ended as the most deadly tsunami in recorded history, with nearly 240,000 lives lost.

This was a devastating wake-up call to coastal communities and tsunami research. Prior to this event, only six of NOAA’s Deep-ocean Assessment and Reporting of Tsunami, or DART, buoys were in place. Scientists could only predict tsunami arrival times, not flood potential. And there was not a global tsunami warning system.

Today, ten years later, we can tell a different story. U.S. and international coastlines are far better prepared for such a catastrophe, thanks in large part to research and technology developed at the NOAA Center for Tsunami Research at Pacific Marine Environmental Laboratory.

NOAA’s DART array is now complete, with 39 buoys operated by the National Weather Service’s National Data Buoy Center. Along with 21 international buoys, this array can measure a tsunami wave as small as one centimeter in the open ocean and provide these data in real-time to forecast when a tsunami may hit the coast and how much flooding there will be. NOAA scientists and engineers are currently testing the fourth generation DART buoy that will be able to measure local tsunamis as well as distant ones.

Flooding forecast models incorporate local topography and historical tsunami data in order to more accurately predict exactly how a tsunami might behave when it reaches shore. NOAA has 75 site-specific models that can provide high-resolution flooding forecasts for effective response and mitigation during a tsunami event.

NOAA has gathered data from every tsunami since 2004 to improve its forecast models. Today, it operates the world’s only real-time tsunami flooding forecast system, using DART data to accurately compute flooding forecasts. The NOAA Tsunami Warning Centers make tsunami data available on the internet, and issue advisories, watches and warnings through the Emergency Alert System and via NOAA Weather Radios.

While it is impossible to prevent a tsunami, we are now much better prepared to detect them and predict their paths and impacts, so those in coastal communities can take the steps necessary to safely protect themselves. 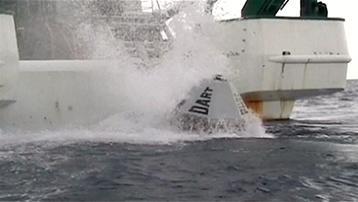 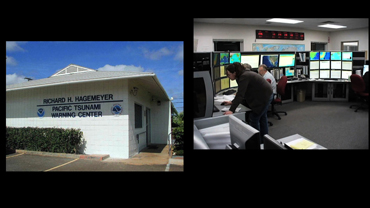 In the years since the 2004 Indian Ocean tsunami, NOAA made great improvements in tsunami detection, forecasting, warning, and preparedness capabilities. As a result, U.S. and international coastal communities are far better prepared to respond to a tsunami.

NOAA continues to make advances in tsunami detection, forecasting, and warning with the goal of improving the timeliness, accuracy, and availability of its tsunami messages.

Reducing the tsunami threat requires more than science and technology advancements. Communities along our coasts and the people who live, work, or visit there must understand and be prepared for tsunamis.