NOAA scientists are exploring deepest parts of the ocean. Learn about their groundbreaking discoveries, and how to watch an expedition live.

I would argue that exploring the Earth's oceans is probably the last grand challenge we have on it's the only place on the planet that really has been never seen by the human eye or even a robotic camera. The surface of the Moon has been mapped at a higher degree of resolution than the majority of the ocean floor.

In the United States, NOAA is the only federal agency with an ocean exploration program. We go into these areas that nobody has ever been before to try to find out what is there. We're mapping these areas at a higher resolution than have ever been mapped before. We're looking at species. We're looking at where they live. We look at the chemistry of the ocean. We look at the biology of the ocean. We look at the geology of the ocean with deep-sea robots underwater cameras and delivering that video feed live to the public and to the scientists sitting at shore paying attention to that information.

Now a lot of people might ask why we would be focusing on the deep ocean in these areas. Think about the rainforest and the immense number of different types of species that exist and the major medical uses that have come out of a lot of those species. Along the way you can look at deep ocean sponges and things of that nature and today and we can find that some of those sponges can be used to develop drugs that can help treat cancer.

There's an interactive nature to this. It's called telepresence technology. We're taking a very few people into the ocean, we're transmitting what we see in real-time to these scientists participating from shore all across the country and frequently from other nations as well in places that they've never been because they're interested in the underlying science. One of the things that excites me the most about what we do is the fact that anybody can participate in one of our research cruises in real time as it's happening. The information in the video is streamed live from our website.

Typically from the minute we take a still a video from the bottom of the ocean floor, it takes about three seconds to get to your desktop computer so you can be sitting at your house and watching live as we're exploring the treasures of the deep.

A lot of what exists in the ocean we don't even know that it's there, and the sheer fact of the matter is that almost every time we're down in the bottom of the ocean, in the deepest darkest places on the planet, we find new species. And we find species that are larger than we've ever expected them to be and that we now have a management responsibility for protecting. This is one of the primary reasons why we explore. 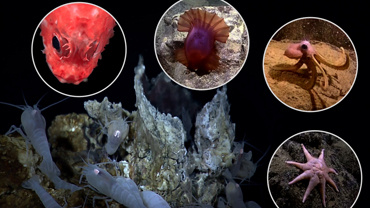 How Much of the Ocean Have We Explored?

The Hohonu Moana Expedition marks the beginning of a major multi-year NOAA campaign to explore and understand the central and western Pacific marine national monuments and sanctuaries.