Animals of the Ice (Part 1)

Narrator:
Their waddle has made them famous.
Emperor penguins may just be the cutest creature in the world’s coldest climate: Antarctica.

These flightless marine birds have adapted well to the ice, snow, and frigid waters.

Emperors are the largest of all penguins, and being big actually means being warmer.  Their bodies can conserve more heat.

Emperors also have more feathers per square inch than any other bird, helping to keep them warm. And when diving for food, a thick layer of blubber helps insulate them from the cold water.

If these birds seem extra cuddly, there’s a reason. Adults and chicks alike will huddle together in large packs to beat the cold. Adults will also walk with newborns on their feet and under their blubber to protect them from the elements.

These birds haven’t let ice become an obstacle. Much of their travel involves sliding on their bellies for miles at a time.

They’re also expert climbers, using their claws and beaks to scale the icy cliffs. They learn this at a very young age. And that’s life with the ice for emperor penguins.

Narrator:
The Arctic circle is home to the largest bear in the world: the polar bear.

You may be surprised to learn that the polar bear is actually considered a marine mammal. While they’re born on land, they spend most of their life on sea ice. This is where they hunt and mate. They’re dependent on sea ice for their survival.

Polar bears are well equipped for Arctic life. They have large furry feet and short, sharp claws, which help them walk on the slippery ice. They also have two layers of fur, which help them stay warm.

But polar bears actually have more problems with getting too hot than they do with dealing with the cold. This is why they walk at a leisurely pace. They can quickly overheat when they run.

Polar bears set up dens in the snow and ice for shelter and to give birth. Cubs will stay inside for several months, until they’re physically ready to venture outdoors.
And that’s life with the ice for polar bears.

Narrator:
Take a look in the shallow coastal waters of the Arctic, and you might just spot a beluga whale.

They don’t look like your typical whale, though. Adapting to life among sea ice, belugas are all white in color. They also have a ridge on their back instead of a dorsal fin, and a thick layer of blubber. Scientists believe they evolved this way to stay warm in their icy Arctic surroundings.

That lump on the beluga’s head is called a melon, and it can actually change shape. Scientists think this affects how they use sound as sonar to locate food and to find breathing holes in the Arctic ice sheet.

During the colder months, as the Arctic water freezes over and the ice thickens, belugas will migrate south to avoid getting trapped in the ice. They don’t want to fall prey to the polar bears or killer whales that hunt them.
And that’s life with the ice for beluga whales.

Narrator:
Krill are small crustaceans found throughout the ocean. They play an important role in the aquatic food chain, particularly in the Southern Ocean.

Antarctic krill provide a vital food source for whales, seals, ice fish, and penguins. These animals depend on eating large quantities of krill for survival in the harsh climate.

For their own meals, Antarctic krill eat small plants like phytoplankton, as well as algae under the surface of sea ice.

Krill have the ability to shrink their bodies and undergo long periods of starvation. These adaptations allow them to survive the winter months in the Antarctic. Krill travel in swarms so dense they can actually be seen from space. And it’s estimated that the total weight of Antarctic krill is more than the weight of all humans on Earth.

Pretty impressive for an animal the size of your pinky. And that’s life with the ice for Antarctic krill.

Narrator:
The Arctic Ocean and subarctic seas are home to a hefty fellow: the walrus.

These beasts use sea ice for resting and giving birth. And not any ice will suffice; it has to be thick enough to support their weight, which can reach up to 4000 pounds.

Their blubber serves as a layer of insulation in the cold marine environment and helps them store energy.

Their flippers are hairless. The skin on them is thick and rough, providing traction on land and ice.

The Latin name for the walrus translates as “tooth-walking sea horse.” You can understand why. Walruses use their long ivory tusks to haul their heavy bodies up onto the ice, to forage for food, and to defend against predators.

The main role of the tusks, however, is a social one. Walruses use them in their herd for dominance and mating displays.

Guess they gotta look cool in this type of climate. 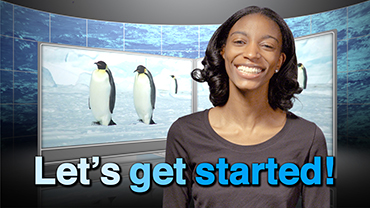 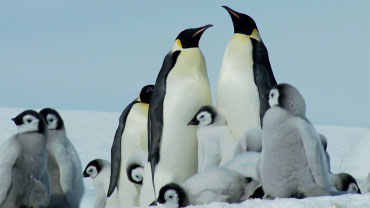 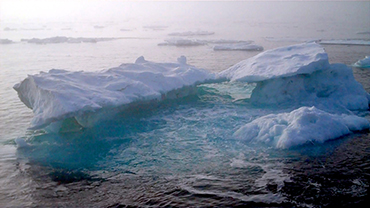 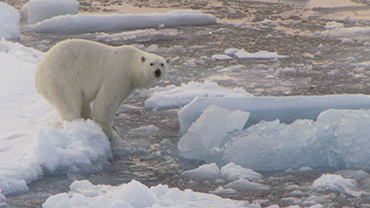 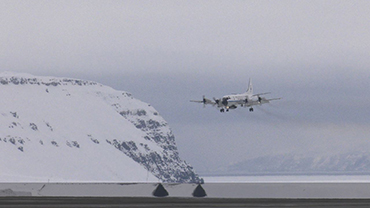 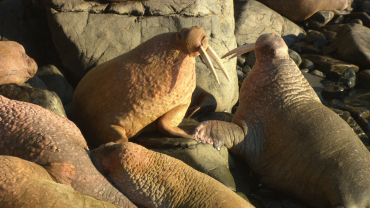 Emperor penguins can dive to 1,850 feet— deeper than any other bird— and stay under for more than 20 minutes.

Polar bears live within the Arctic Circle. They mainly eat seals. They stalk them through the seal's breathing holes in the ice.

The word walrus is latin for "tooth-walking sea horse." Walrus tusks can grow up to 3 feet long and are actually teeth.